More about me and some of my history

Hi! I'm TheChaseExp (short for TheChaseExperience) but I just formally go by Chase. I'm a self taught digital artist that usually specializes in 2D illustration and pixel art from time to time. If you found me through something I've worked on or just found yourself here randomly, welcome all the same! This is my website to basically host and redirect some of the works I've done or contributed to, as well as my personal art.

In terms of my history, my path to becoming an artist started quite a bit of time ago when I was younger...

Being on the internet in the early days and playing retro video games had influenced me quite a bit. Going on sites such as Newgrounds, viewing a bunch of sprite animations made in Flash, seeing the variety of styles in 2D games... I wanted to start making stuff like that, so I did. I got started by experimenting with pixel art first. I would look up spritesheets of the various games I played or had seen featured in flash animations, paste them right into Microsoft Paint, and mess around with the sprites: giving them new poses, recoloring them, or changing how they looked.

Experimenting with these sprites actually helped a lot with understanding more about what pixel art even was. Eventually I'd try my hand at making all new custom sprites, sometimes in the styles of the various games I played and adored; this also taught me about some of the specific techniques used: color palettes, dithering, anti-aliasing, etc. As mentioned, I was inspired by the various online animations I've seen. But I actually didn’t know how they were made in the first place, so as a kid I made little personal sprite comics for fun instead. 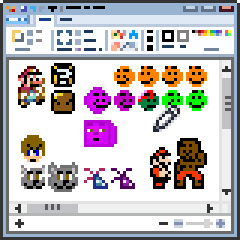 I grew out of all that pretty quickly though, as I ended up getting a drawing tablet to start doing more digital illustration. In general, I started to make more original artwork. But I kept using Microsoft Paint for creating pixel artwork, mostly due to already being comfortable with it. Occasionally, I would use Paint.NET on the side if I needed to make sprites with transparency or use layers in the process. From there on, I'd usually just do some for fun little personal projects with a game dev friend or two.

Eventually, a good friend of mine gave me the opportunity to work on a video with him and some others. The video in question was Terry’s Athletic Bodywash, and it was probably my first real opportunity to prove myself. So, I decided to try out Aseprite as some of the work necessary required me to do some animation. After spending time and working closely with those involved, the video was released. Seeing the love and success the video received reminded me of why I even wanted to make art in the first place: to share my passion with the world.

Over the next few years after that, I’ve started participating in even more awesome projects, collaborating with new friends and creatives alike, and I hope to continue that for the foreseeable future. I’ve also learned more as an artist since, becoming more open minded and not as afraid to experiment with new processes. 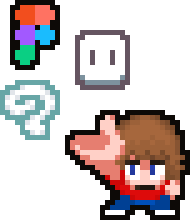 The tools that I mainly use nowadays include Aseprite for pixel art and animation, Clip Studio Paint for digital illustration, and Figma for vector graphics. I use a Wacom Intuos Pro Medium when I’m creating digital artwork and mainly a mouse for pixel art. Usually I enjoy making artwork of characters or creating environmental landscapes. My efforts have not only gone towards YTPMV/otoMAD collaborations, but the occasional game development stuff as well. I also plan to learn more about Blender and 3D artwork in general in the near future.

I believe as an artist, there’s always room for growth. I plan to continue pushing myself even further; to grow, improve my skills and capabilities, assist in the vision of others, and create new opportunities. The one thing I've found to be always consistent with projects: the element of surprise. Seeing how an audience reacts to the result of hard work; it's completely gratifying.

To put it rather simply: I want to keep making cool and fun stuff, no matter if it's with a team or solo, and share those experiences with everyone.